Posted on August 29, 2012 by tunadogoffshore 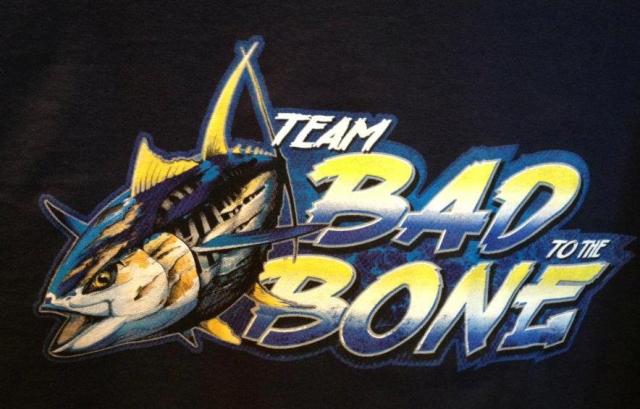 And the Journey begins for us in Ilwaco.

Want to know what it takes to fish albacore three days in a row…total craziness because no one in his right mind wants to do something like that…It will flat wear you out. Especially if you do it The Bad To The Bone way.

We started by pre-fishing on Thursday and when we’d catch a fish it got weighed and if it wasn’t a tournament grade fish we picked up and moved leap frogging all over the ocean looking for “Fat Charlie”. Thursday’s result 41 fish on the deck and a few GPS waypoints set for the first day of competition of the Ilwaco leg of the Oregon Tuna Classic.

The next day – day 1 of competition we wasted no time going straight to our designated GPS starting point some 40 miles offshore. At the end of the day we had 22 fish in the box and hoped they would be worthy enough to make the podium. As it turned out, they were, and that mode of thinking paid dividends for Team Bad To The Bone when we won the Big Fish competition for Friday and also hit the podium a second time with a 3rd. place finish.

Day 2 got off to a rocky start when the live well malfunctioned during the night and we lost 5 scoops of live bait. We were using crew member Stephen Seals new 53ft Riviera, “BOOYAA”, and as with any new boat things need tweaking in the first year. Weddy and I stepped onto the boat the next morning to find a pretty somber crew who had been up most of the night fixing the problem. Beaten down and barely awake we motored over to the bait dock and loaded up another 5 scoops of live bait then filed in line with all the other boats working their way out of the Ilwaco channel to the starting line a mile offshore. 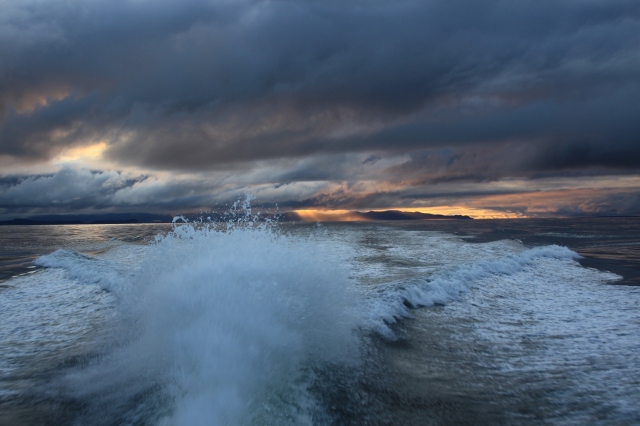 The sun was just peaking over the clouds when the Coast Guard shot the flare sending the teams westward turning the sea into a froth of boat wakes and prop wash. Ten minutes after the start Stephen and I were alone on the fly bridge while the rest of the crew found couches and seats to rest their heads and catch up on badly needed sleep. The land slowly faded out of sight and 40 minutes later the radio squawked to life when one of our buddy boats called to invite us into their wide open live bait bite. It wasn’t much of a debate as we gracefully thanked them and kept motoring to our predetermined destination. We weren’t into catching a lot of fish just 5 piggy’s so on we went and for the next 10 miles we cruised past jumpers. On a normal day we would’ve stopped and worked them but this was no ordinary day, we had one thing in mind – BIG FISH – We had a plan and we were on a mission.

It was a quiet ride but soon the throttles came back and the big boat settled into the water as our sleepy crew came to life and we quickly deployed our gear. We were now on the GPS waypoint where we had found the bigger fish the first two days. First trolling northwest then changing directions to see if troll direction had any effect today.

Pretty soon tuna were hitting the deck and when the reels would start singing we’d quickly toss chum and go into our orchestrated routine of pitching Fish Trap swimbaits, Live bait, and working the iron while one person cleared lines as we intently worked to get the bite wide open. The bite was mediocre the first few hours as we’d hook one or two on the troll, try to convert the stop but nada and by noon we had scratched out 20 fish. 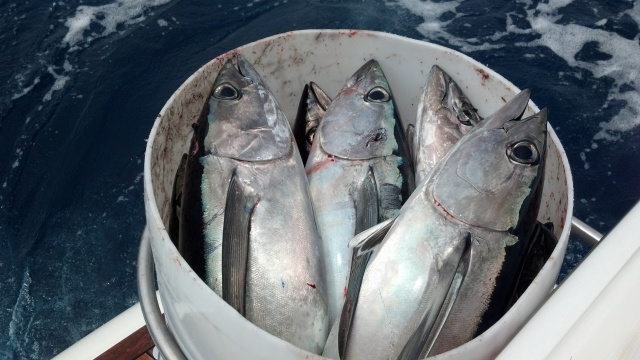 It’s at this point that the average tuna guy would just give up and stay on the troll but over the years I’ve learned you have to stay with it and keep trying to convert every troll stop into a wide open bite. I teach in my seminars to stay after it because you never know when it’s going to happen and persistence will generally pay off. You have to be ready to spring into action on every stop.

Then a little after 12:00 it happened, hooked up on a troll caught fish and the bite was on. We were soon doing the dance, moving around the boat following our fish – one rod over one rod under, throwing a little live bait for chum once in awhile to keep them around the boat and as quick as it started it was over but another 20 fish hit the deck during the wild flurry. Some on live bait, a few on iron, a couple more on Fish Traps. Then it was back on the troll again and every time a reel would sing we’d go into the same Chinese fire drill.

We pulled our gear at 3:30 and pushed the throttles to the stops as we turned the boat and headed for port. We washed the gear with fresh water, peeled off our rubber bibs and grabbed some snacks from the galley – it was over and now we could relax as the big boat cruised for home.

It took 30 minutes to pull 56 tuna out of the fish box only weighing the big ones and by the time we backed into our slip we had picked out the five heaviest. Hopefully they were heavy enough.

Three hard days of fishing and 119 tuna to show for it and when it was over we had a 3rd place trophy from Friday, won the Big Fish competition for the second year in a row and placed 6th on Saturday giving us a combined weight that landed us in 2nd place for the weekend. Then after our 25 Bonus points were added from the victory in the Big Fish competition Team Bad To The Bone took a 15 point lead and moved into first place in the IGFA points standings for the Oregon Tuna Classic as we now go into the finale in 3 weeks.

The real winner was the food banks of Pacific County Washington and Clatsop County Oregon when the Oregon Tuna Classic handed them over 10,640 pounds of fresh albacore.

Insane craziness but well worth it..