Posted on June 4, 2012 by tunadogoffshore

Traveling down the Cascades Lakes Highway I was looking forward to a couple days of fishing on Wickiup Reservoir with some buddies. You never know what to expect or who might show up from year to year. This annual fishing trip always generates wild times, a lot of laughs and a few new friendships. I’m not sure the designated tree for the beer can pile is indicative of how much fun we’ve had, but maybe the size of the pile might tell who showed up that year. We stood around the campfire catching up on the past, telling jokes and stories, while the beer flowed freely into the night. Sometimes well into the wee hours making it difficult to find a crew awake and sober enough to crawl out of their warm snug sleeping bags at the crack of dawn. The lite drinker that I am, I always try to make sure my buddy Tom Shew is along. We’ve shared many fishing trips and Dr. Pepper being his drink of choice makes mornings a little more enjoyable for both of us.

This adventure would prove to be a soggy one as a cold front was threatening with rain and snow. It was early May and in the cascades that can mean beautiful sunny weather one moment or snow blowing sideways the next. I’ve learned you have to be prepared for anything.

I was just coming off four days of guiding for Mackinaw Lake trout at Odell Lake and the fishing gods had been good to us with fantastic fishing and exceptional weather. My fingers were still tender from being in the water and around sharp teeth and fishing hooks. Four days of guiding had yielded 34 Mackinaw ranging from 8 to 31 pounds, releasing all of them for another day and creating a great start to the season.

The first day on Wickiup was typical Cascades weather. The sun shined, then it rained followed by a light snow, sleet and the wind blew. Out on the water we stayed inside the comfort of the boat canopy keeping the heater company and only went outside long enough to reel in a kokanee from time to time. Fishing was slow, as it very often can be when the wind blows, making it difficult to control the trolling speed. The water was 37 degrees and most of the peaks around still had plenty of snow covering them. When the wind came up it would pierce the layers of clothing like cold sharp steel.

By 10am we retreated to the warmth of the campfire at Gull Point Campground with only a dozen kokanee in the cooler to show for our efforts. Shivering, the warmth of the fire slowly penetrated us and soon we were debating what to do next. After a warm breakfast in our bellies, I informed my two fishing partners, Tom Shew and his buddy Gary, this kind of weather was normal for this time of year and we could pull the boat to chase Mackinaw back at Odell. Being adventurous chaps, and with no hope of getting back out on Wickiup until evening made the decision easy to make a trip to Odell Lake.

Within an hour we were on the water at Shelter Cove Resort. Tom stepped into the boat and almost tripped as he caught sight of the enormous plugs dangling from the rods and grinning with a puzzled look on his face. I smiled and remarked, “big plugs equal big fish”. These two had never fished for the monsters of the deep in Odell and didn’t have a clue of what was in store for them or what to expect. If the plugs were any indication, they were in for a big surprise.

The weather was cloudy, cold and a light breeze blowing from the west created the signs we needed for great Mackinaw fishing. The Kokanee fishermen had all surrendered to the shelter of their RV’s and we had the lake all to ourselves. As I began coating anchovy oil on the plugs, I noticed them looking at each other laughing and shaking their heads in amazement. I continued with my routine clipping the lines into the downriggers and sending the plugs into the darkness below. My companions intently observed my every move as I precisely went through the motions of the techniques I had honed. Having never experienced this type of fishing was intriguing and the duo was about to get introduced to a whole new world of chasing deep-water predators. Having only fished these monsters for two years, I was also still learning the ways of these magnificent fish and the opportunity to share this was a real treat for me as well.

We were trolling Ace High Canadian plugs made by Silver Horde for commercial salmon trollers. Attached to 4 feet of leader topped with a 6-bead chain swivel that was snapped into the main line swivel. During the early part of the season you want to put the plugs out about 100 feet behind the boat before clipping them into the downriggers and sending them into the darkness below. Once you get into June and the fish have been chased, they get a little wary and you need to let them out 125-150 feet behind the downrigger before clipping them in. Then the task of running one lure snaking along the bottom while lure number two maintains at least 10 feet above to keep from tangling can be a challenge. 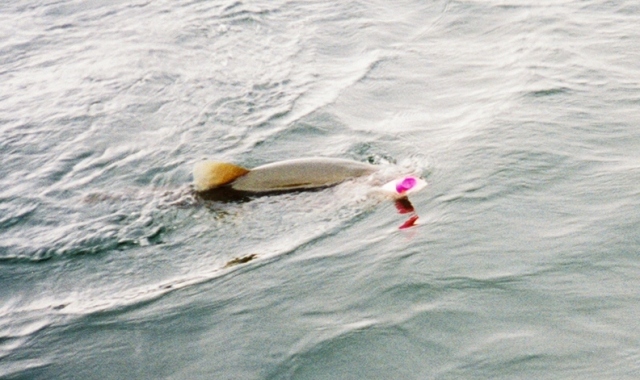 If you think more is better, forget it. I’ve ran four set-ups on 4 downriggers and you’ll catch fish but you’ll have a smaller average size. If you want to catch the big boys you need to run big lures and remember their spooky. When trolling plugs like Lymans, J- Plugs and Silver Hordes it’s critical to keep your trolling speed over ground at 2.5-3mph. Too slow or too fast and the lures won’t be as effective and as these speeds you’ll also need to stay close to your downrigger to constantly be adjusting it as the bottom goes up and down. It’s a lot of work to do it right but after you land a couple of these brutes you’ll be hooked and understand what it takes to catch trophy size macks.

Mackinaw lake trout were planted in Odell Lake in the early 1900’s and because they live on the bottom and only periodically come up to feed, it takes the use of a good fish finder and a downrigger to put your bait in their feeding zone. Combine the technical difficulty of this fishery along with the abundance of the Kokanee and it’s no wonder people have left them pretty much alone, but today that would change!

Barely trolling 400 yards Tom asked “What does that mean when that pole is limp like that”? I grabbed the rod reeling frantically trying to get all the slack taken up from trolling deep and fast; the “race” as I call it. The fish is shaking his head trying to spit the plug while the fisherman reels furiously to get the line tight –Who will win? I handed the rod to Tom as we won the first round. Gary followed by example when the other rod also went slack. Amazing, it couldn’t be, a double – my first!

It wasn’t long before we were starring at a pair of 8 to 10 pound fish lying on the floor of my boat and I told them, “These are small ones but the best eaters if you want to try them on the grill”. The cross-eyed look on their faces told me they weren’t sure of what to believe next. Smiling and happy we threw them in the cooler and went back to fishing.

By now it was snowing and the shoreline was nowhere to be seen and we didn’t mind as we more concerned with watching our rods popping up slack. Trolling up the lake and following the 140-foot contour line we huddled around the heater to keep our fingers warm.

Now thoroughly impressed I told them I was changing the rules of the game. I would no longer be joining in the “race”. Whoever is closest to the rod should grab it and reel like crazy till it’s tight. Twenty minutes later the score changed as they hesitated looking at the limp rod debating who should grab it. That brief hesitation didn’t produce the outcome they hoped for. You’d think after I threatened them with the boat paddle they’d get faster, but that wasn’t the case. Soon the score was fishermen 2 and fish 2 but my mates were quick to catch on with no more misses the rest of the day.

I wanted them to experience the “race” and the battle getting the most from this adventure while adding a few more memories. 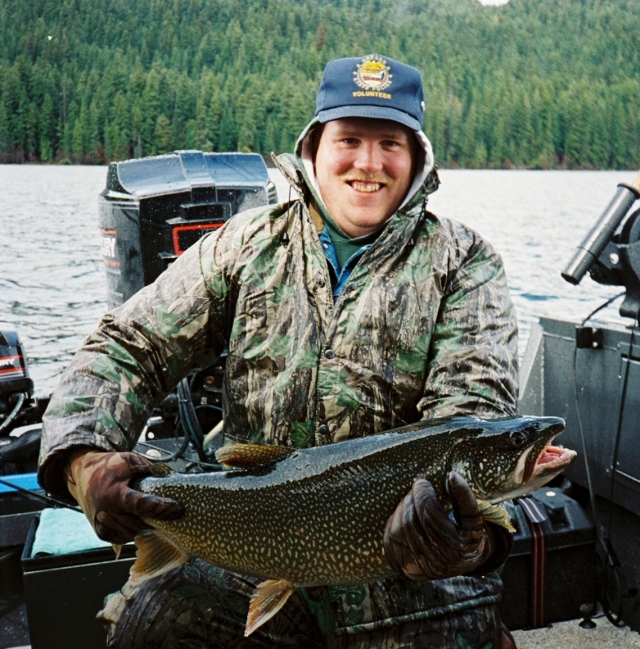 They got faster at reeling up the slack and the fish got bigger when the guys soon released two fish, each exceeding 18 pounds.

The day was capped by Tom’s victory over a 32 pounder smiling from ear to ear as I took the photograph. This would not be a day he’d soon forget as he released the fish and we soon headed back to Shelter Cover to load the boat.

Tired from bobbing around in the boat and tugging on Odell’s monsters we couldn’t wait to get back to Gull Point Campground at Wickiup to tell the others as the campfire would have a few more stories tonight.